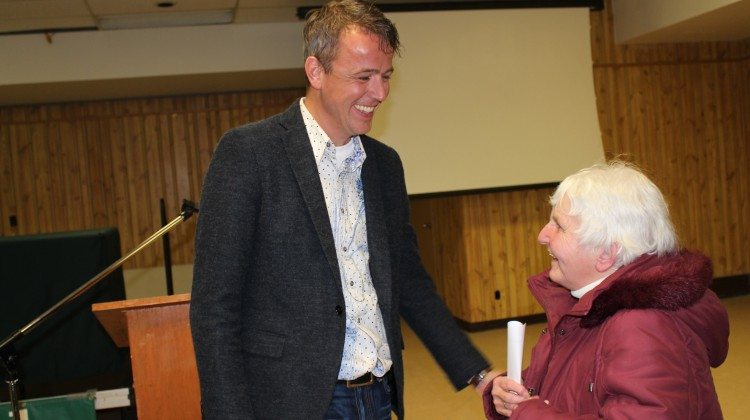 Photo: Justus Veldman talks to the community about their plans. Supplied by Taylor Ablett.

The Resolute mill in Iroquois Falls is going to be re-purposed. It was announced last night that Abitibi Riversedge is acquiring the mill and the trestle bridge. CEO of Riversedge Developments, Justus Veldman, says they are committing to cleaning up the mill site, and getting it shovel ready. There are no industries confirmed to be using the site yet, but Veldman says there has been discussions. Getting it shovel ready means when an industry does come forward, they can use the mill right away with power, gas, and employees.

Right now, Abitibi Riversedge is decommissioning and doing an environmental clean-up of the mill, which Veldman calls a massive undertaking. It’s going to take about two years in total, however there may be some buildings that will be able to be used before that. There will be some local jobs available, but no numbers are being confirmed.

Veldman says their first priority is to re-open the bridge, getting it ready to be used in six to eight weeks. MHPM Project Managers has been awarded a contract to make that happen. Abitibi Riversedge, MHPM, and the Trestle Bridge Working Committee will all be working together to make sure the bridge is ready to go for this summer.

The announcement was made in Iroquois Falls last night to a crowd of about 400 people.