Timmins “Takes Back the Night”

Timmins is looking to take back the night.

The Timmins and Area Woman in Crisis is hosting its annual rally and march to bring awareness and education to the community about sexual assault tomorrow night. TAWC says it’s important to discuss the problem around assault because it denounces the victim blaming. The organization says the walk really breaks down the information and puts the responsibility where it should lie which is on the abusers.

TAWC says the walk and rally is for everyone, including the men in the community. The organization says sexual assault isn’t just a women’s issue, but a societal issue. It says we need men on board to in order to stop violence against women as a whole.

The event starts at 6:30pm at the TAWC office. It will start with a few speakes and rally before heading into the support walk. Below is a map on the route. 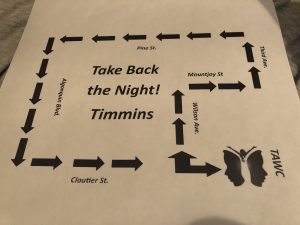