Look up, look waaayyy up at Michel Campeau’s giant snowman 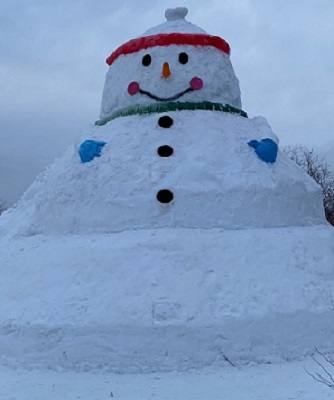 Michel Campeau invites anyone to come have a picture taken with his 25' snowman at 688 Carrigan Rd. (Michel Campeau)

As snowmen go, there aren’t many bigger than the one Michel Campeau  spent ten weeks building. It’s at his home on Carrigan Road, which connects Highway 101 East with Frederickhouse Lake Road.  It’s 25 feet high and 30 feet diameter at the base.

“At the beginning, it was easy,” he recalls. “It was the snowblower but after it got higher and higher, then we had to push the snow with the snow scoop.”

Campeau’s wife, daughters and eleven grandchildren helped.  And the ramp behind the snowman that they used to push the snow up, is now a 125-foot slide for the kids.

The snow ramp used to pile the snow up for the snowman is now a 125′ slide for Michel Campeau’s 11 grandchildren.
(Michel Campeau)

“The eyes and the cheeks and the buttons are slabs of birch and the nose is a six-inch log that I made it pointy like a carrot.”

Campeau says he’s always loved building snowman.  The next tallest was 19 feet, three years ago. He wanted this year’s to be 40 feet high, but settled for 25.  Health issues will prevent him from trying to top this year’s snowy, friendly giant next year.