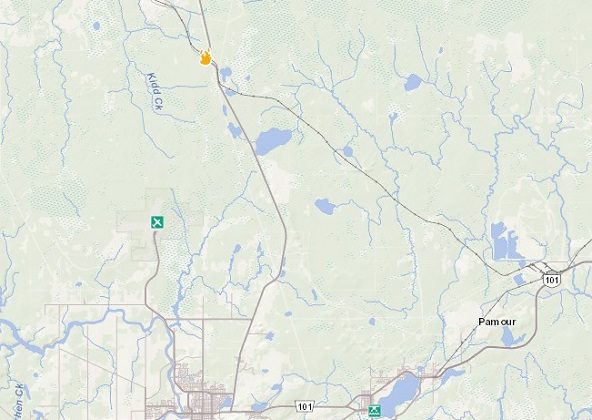 The flame icon shows where the fire is, right at the Kidd mine entrance and the turnoff to Cochrane. (Ontario Ministry of Natural Resources & Forestry)

That small forest fire that sparked up late Thursday near the Kidd mine site is officially considered by the natural resources ministry to be contained.

Fire information officer Shayne McCool says it was 2.5 ha at its largest.  Firefighters will spend the day extinguishing hot spots.

“We have one crew on that fire and they did work closely with the local municipal fire department yesterday to help contain the fire.”

A fire crew has four people on it.

“They’re highly trained, so they know how to attack a fire efficiently,” says McCool.

One hectare is about the size of a football field.