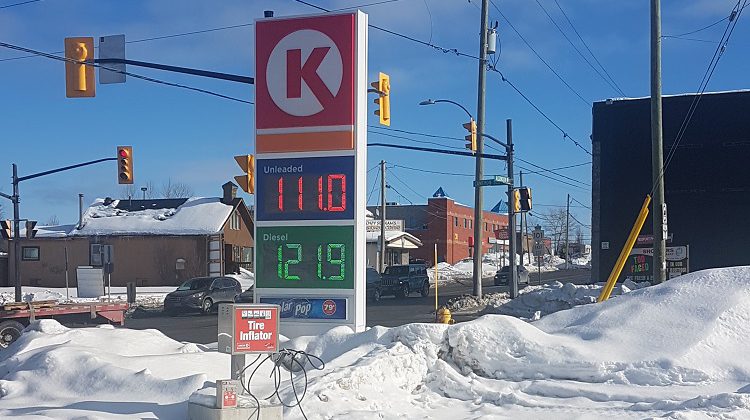 Late Monday morning, this was the sign at Circle K on Algonquin Blvd. at Cameron St. St. Some stations were selling for one-tenth of a cent a litre less. (James Grenier, MyTimminsNow.com staff)

The price of a litre of gas has fallen by about a dime over the last week in Timmins, and the president of Canadians for Affordable Energy says it’s partly because of coronavirus.

Dan McTeague says it’s caused the demand for oil and gas to go down, so the price follows suit.

McTeague adds that “the sweet spot for consumers” should continue for at least three or four weeks.

“There may be the odd hiccup where we go up five or six cents a litre. That’s retailers recovering those retail margins…  But generally, I think these prices are going to remain at or perhaps a little lower. We could see something like this extend well past the March Break, maybe even to April 1st.”

That day, the federal carbon tax increases 2.3 cents a litre.  Then April 15th, petroleum companies switch to summer blend gas, driving the cost at the pump up another four or five cents.