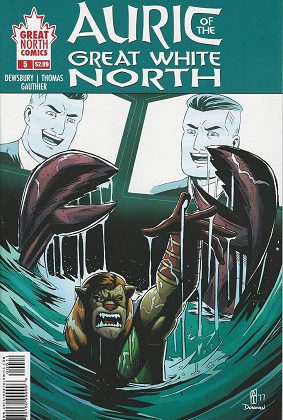 The comic book superhero from Timmins is up again for two Canadian comic book awards.

The fifth issue of “Auric of the Great White North” is up for the best comic book and creator-writer Davis Dewsbury as favourite writer in the online vote.

Dewsbury explains that the awards are handed out by Sequential Magazine, and the work of his creative team and him are nominated for the third straight year.

“Auric has won a couple of years back, our number three issue,” Dewsbury recalls.  “And then last year, we got runner-up with our Auric spinoff, Norlan and now for this year’s awards we’re nominated for Auric number five, so we’re pretty excited.”

Dewsbury is modest on the topic of his favourite writer nomination.

“I try not to focus on that too much.  I like to kind of plug the award for the book, because that kind of features my creative team with me.”

If you want to vote, follow this link.  It closes Feb. 9.