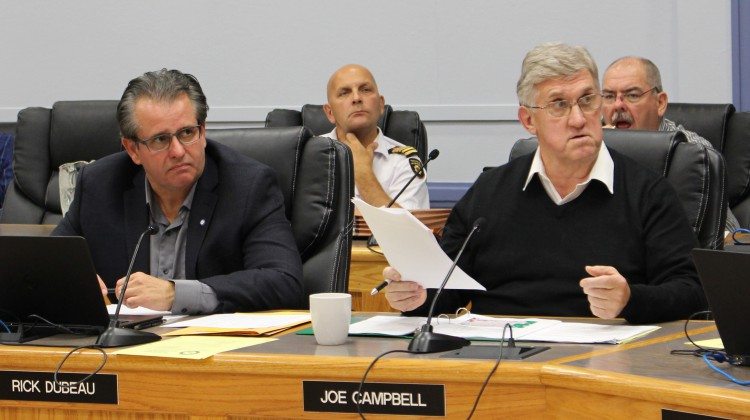 Timmins city councillor Rick Dubeau has been kicked off all of the boards and committees he sat on, following a decision made by council last night. This comes after Dubeau claimed city staff deliberately misled council over the cost of the Connecting Link, which Mayor Steve Black was looking for an apology over. Dubeau refused, and council voted to strip him of all board responsibilities.

Dubeau sat on the BIA board, the hospital board, and the MRCA board. He will also no longer be on the hiring committee for a new Chief Administrative Officer (as Joe Torlone is set to retire), and will no longer be able to serve as Deputy Mayor, which typically rotates through council. Dubeau told Moose FM this decision sets a dangerous precedent at city council. He says members of council are on boards asking questions that may differ from the opinions of those on that board. He questions if this means councillors will now be thrown off those boards, if they so choose. Dubeau says this move creates a slippery slope. He says they don’t have to like what he says, but they have to respect his right to say it.

Dubeau made similar comments during the public portion of the meeting, saying Freedom of Speech protects his right to speak out. When the time came for the vote to strip Dubeau of his responsibilities, he left the meeting. He says that’s because the vote was happening during a Special Meeting, which followed the Regular Meeting. That Special Meeting was called very last minute, and Dubeau says that in of itself is illegal. He says he is also questioning Black’s authority to impose last night’s ultimatum, and says he will be bringing this issue back to the council table.

The copies of the resolution to vote Dubeau off of the boards are not available online, however Moose FM has obtained a copy, which is pictured below. Mayor Steve Black says the situation could have ended differently, but hopes the decision allows council to move forward. He says debate is important at the council table, but there is no room for inappropriate conduct. Black says in his opinion, false accusations are inappropriate comments towards city staff. He says he agrees with a lot of what Dubeau is saying, including how debate is important around the council table. But, he says accusing staff of purposely misleading council in a public meeting is not the way to deal with the issue. Black says it should have been brought up one-on-one with either himself or the city’s CAO. He says that leads him to believe Dubeau is no longer a suitable representative on those committees, if he refuses to apologize.

Councillor Andrew Marks spoke on behalf of the City Clerk, Steph Palmateer, who is part of the city staff Dubeau is referring to. He read a letter from Palmateer, which essentially says he takes his role very seriously and he is appalled and insulted council thinks he actively tried to deceive them. Marks says he takes this to heart. He says council is now the laughing stock of the community. Marks says council is out in the community, representing the city, and he has very little faith in trusting Councillor Rick Dubeau going forward.

Hear the audio of the beginning of the vote below:

The full video is on the city’s website, including Palmateer’s letter to council, under item 7A.