Rock on the River 2023 schedule is set: One night country, one night rock 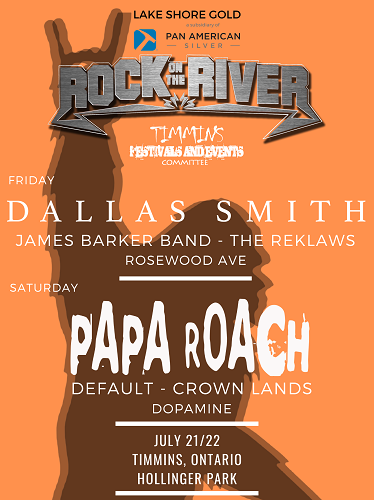 Earlier than ever, the line-up for this coming summer’s Rock on the River music festival in Timmins is out. Timmins Festivals and Events Committee chairman John Olaveson says it’s one night country, one night rock.

His opening act is right from our backyard: Rosewood Avenue from Matheson.

“They’ve gained popularity the last few years around the region and in Ontario,” says Olaveson. “I’ve seen them playing some festivals around Ontario with Dean Brody and stuff like that. So that’s exciting.”

Also playing Friday night are the Reklaws and the James Barker Band.

Even though the next night is all rock, Olaveson notes that Dallas Smith is featured again.

“Dallas is going to be here for the weekend. Looks like he’s staying in Timmins for the weekend because his rock band Default will be supporting Papa Roach.”

Olaveson says California-based Papa Roach is the biggest investment in Rock on the River history.  It’s globally popular with over a billion streams on Spotify.

Tickets are available from www.rotr.ca .

Full details and what went into booking the 2023 festival are in the audio link of our interview with Olaveson, right here: