Something new from ROTR for the family 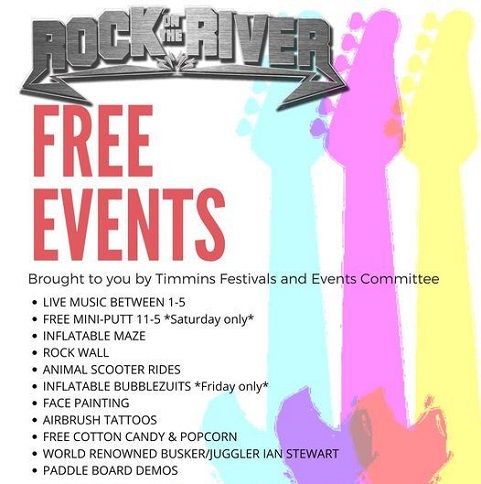 A new dimension is being added to this year’s Rock on the River event, July 22nd and 23rd. at Hollinger Park.

Director of sponsorships Norm Dwyer says out around the pavilion and the sundial, there will be a “free zone” for families – a safe, alcohol-free space with live music and a lot of activity.

“Kayak Fest did very good at providing stuff like that,” he tells My Timmins Now Dot Com, “and it was just lacking this year, so we stepped up.”

He adds that it is helping TFEC become more of a community.

“We already are, but we want to include everybody in the community. So we’re giving back a bit, for how the community and sponsors have given to us.”

Most of the activities from Canada Day are being offered, and many more.  World renowned juggler Ian Stewart is already scheduled for the concert site, so Dwyer says the TFEC decided to put him to work in the park during the day.

“What’s so special about him?,” asks My Timmins Now Dot Com.  “He juggles chain saws,” replies Dwyer. “And they’re running when he juggles them?” “I’m going to assume so.”

Among highlights is free Mini-Putt on Saturday afternoon… and paddleboard yoga on Gillies Lake that day. Registration with Rebel Soul is required for the yoga.

Timmins Museum history: The professionals who’ve run it over the years

Timmins Museum history: The professionals who’ve run it over the years

Stopping traffic in one location, slowing it down in another