Karen Bachmann hit a gold mine, when the Chamber of Commerce invited the museum director-curator to pick through its archives.

Back in 1961, there was a report commissioned by mayors in the region and the Department of National Defence… dealing with the use of underground mine workings as fallout shelters… should the Cold War become a nuclear conflict..

Bachmann says it provided for 50,000 refugees from around the province to go underground with the locals.  Most of them would drive here.

“So they start off by looking at traffic in the community and how we’re going to run the traffic, and what mines we’re going to be using for underground,” Bachmann relates.  “And that included the Hallnor, the Pamour, the Paymaster, the Ankerite, Preston East Dome, the Dome.”

Interestingly, neither the Hollinger or the McIntyre are mentioned.

Ten pages of the report are devoted to traffic flow. Eighty percent of refugees would get here by car. Traffic flow and parking were both issues.

“The firemen were called in at this point and would be at the parking lots, to hose down all of the cars to make sure there was no accumulated radiation dust,” says Bachmann.

Next Monday, we’ll head underground to learn how all those people would be accommodated. 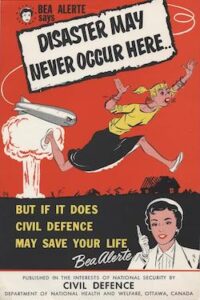