After ten years without it so far, the idea of reinstating the Northlander passenger train is moving from planning to implementation.

Premier Doug Ford and members of his cabinet rode the train into Porcupine — in the east end of Timmins on Sunday, to the site of the future Timmins station.  He announced more money on top of the $5-million committed last year to planning and design.

“And today, we’re announcing a new $75-million investment to bring passenger rail back to Timmins and Northeastern Ontario,” said Ford, “at a time when our government is building up homegrown supply chains that connect resource industries and workers in the North.”

Appearing at the premier’s event, Ontario Northland CEO Corina Moore called it a “monumental milestone”, moving the service from planning to implementation.

“So with a 137% increase in the population aged 80 and over in northern communities over the next 25 years,” she noted, “this service will provide a vital link and other important services not easily accessed by northerners.”

The premier commented that the service will be a huge boost for families and tourism. 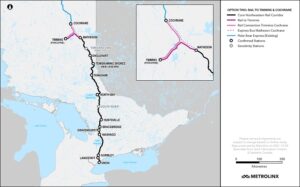