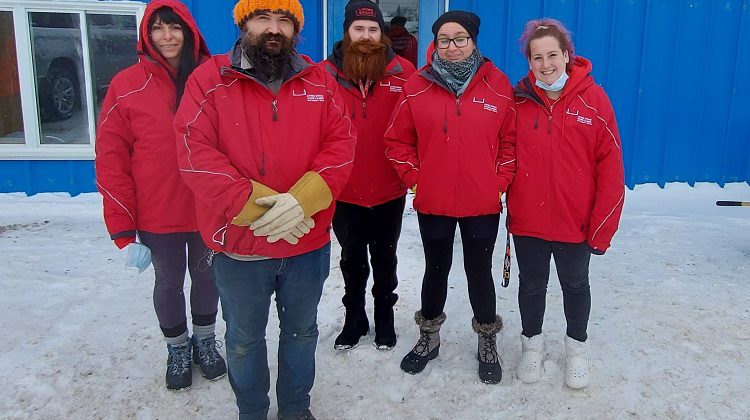 Living Space outreach workers in front of their new shelter (l-r:) Shiloh Spencer, Thomas Hutchison, Robert Dennison, Michelle Couture and Isabelle Chartier. At the official opening, Living Space board chair Brian Marks paid tribute to "everyone in red", staff at the shelter who make it what it is. (Bob McIntyre, MyTimminsNow.com staff)

A community gathering Monday afternoon marked the official opening of the new location for the Living Space homeless shelter on Spruce Street South.

On behalf of the city, Councillor Cory Robin thanked the community organizations represented there, for the help they give Living Space as the city deals with the challenge posed by homelessness and addictions..

The shelter is the hub of the city’s works towards ending homelessness by 2025, and solving the addiction crisis.

Robin told the ceremony that unlike too many other cities, Timmins admits that it has the challenge, and is doing something about it.

“Happy to celebrate that the Living Space is moving locations, increasing services, putting more resources at the fingertips of people who need it, people who need someone to lean on,” he stated.

Robin says anyone who overcomes a challenge doesn’t do it in a vacuum – they had someone to lean on.