The South Porcupine Food Bank is opening a new location this Saturday, while it prepares another, possibly permanent one.

Since fire damaged the location on Golden Avenue on June 25th, it’s been operating out of the Scout Hall, using a canopy provided by Giant Tiger to work under while distributing food from its van.

“We’re getting everything transferred over there and we’ll be open for business this Saturday from 9am to 11am and then Tuesdays from 1pm to 3pm,” says Davis. 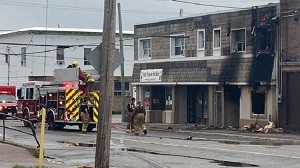 The organization has also signed a 12-month lease on a space that could become its permanent home.

“The front door is at 97 Bloor Ave.,” Davis reveals, “so it’s right beside the South Porcupine library and it’s right across from the volunteer fire department. So you can’t do better than that for insurance purposes.”

Since the fire, businesses and organizations have collected over ten-thousand-six-hundred pounds of food and more than 40-thousand dollars cash for the South Porcupine Food Bank.