Photos of the break and enter suspect have been released 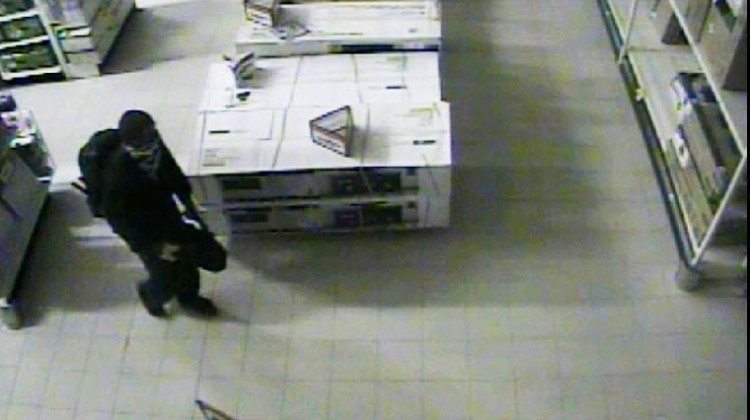 A description of the break and enter suspect has been released. The Timmins Police released photos of the man who broke into Canadian Tire on Wednesday, making a beeline for the firearms. The man’s face is covered with a black and white balaclava in the surveillance tapes. He has dark hair and a thin build. He was wearing jeans, a dark long sleeved shirt, and was carrying a navy backpack. Police don’t know who he is, and he is still at large.

The police released a lengthy press release on the events of the day, including photos of the suspect. That release is as follows:

Media Release:
The Timmins Police Service continues its investigation into the June 17, 2015 investigation of break and enter at the Canadian Tire Store, located at 2199 Riverside Drive.

An employee attended at the store in response to the alarm. Upon entering the building the employee could hear the suspect in the building. Timmins Police Service were notified at 4:16 a.m. with the initial officers arriving at approximately 4:20 a.m. The initial responding officers conducted a search where it was discovered that the firearms display had been breached and an unknown quantity of weapons were missing. The officers then evacuated the building and set up containment around the perimeter of the building.

With the assistance of the business owner, the Timmins Police Service incident commander and Emergency Response Team commander were able to remotely view security video footage. The footage indicated that a single male subject entered the store which activated the building’s alarm. Once inside, the suspect immediately attended at the firearms display; breached the display and gained access to the firearms. The video displayed the suspect carrying a backpack with what appeared to be the barrels of two long guns visible. There was no footage which showed the suspect exiting the building.

With this information it was determined that additional resources were required and a request for the assistance of the Ontario Provincial Police Tactics and Rescue Unit (TRU) was made. The tactical response to the incident was turned over the Ontario Provincial Police Incident Commander at 9:30 a.m. Using the information available, the OPP commander requested a larger evacuation area which included the diverting of traffic off of Riverside Drive. Given the size of the Canadian Tire Store building, the OPP Incident Commander also requested additional resources, including an unmanned aerial camera, a tactical canine, as well as addition TRU officers, which would permit the safe and effective securing of the contained area. Many of the additional resources were flown to Timmins from various points in the province.

The building and containment area search was completed by OPP TRU officers at approximately 8:00 p.m. with no suspect being located. Tactical control of the incident was then transferred back to the Timmins Police Service at approximately 8:14 p.m. The matter remains under Timmins Police Service jurisdiction and is being investigated by the Criminal Investigation Section.

Investigators have obtained still pictures of the suspect while inside of the building. The suspect appears as being a male, with dark hair and thin build. He is wearing jeans, a dark top, and his hiding his face with a dark and white balaclava. He is carrying a navy school bag. At this point the identity of the suspect is unknown, and he remains at large.