Break and enter suspect still on the loose 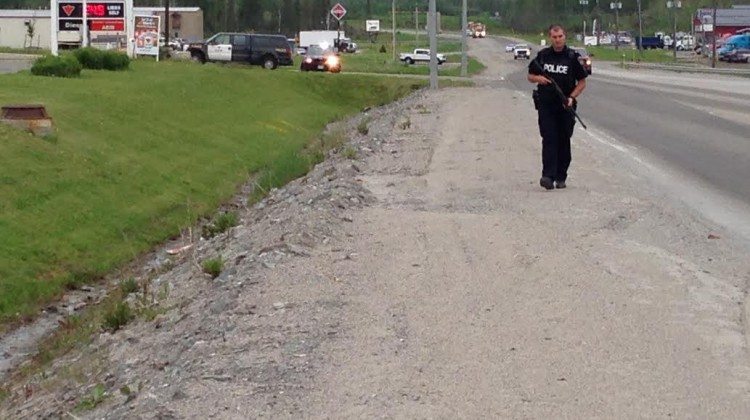 A day long search for an armed man turned up nothing. Yesterday’s 18 hour search began around 4:30 in the morning when a man broke into Canadian Tire, targeting the gun section. Police had the area blocked off for hours while they looked for the suspect. However as Kate Cantin, Communication Coordinator for the Timmins police says, he got away.

“No suspects, or individuals, were located inside the Canadian Tire building,” says Cantin. “At this time, the perimeter in that area has been lifted. It’s no longer believed that the suspects, or individuals involved, are currently in that area. It’s likely that the suspect exited the building at the beginning of the incident, before police were able to fully contain the building. Police don’t believe that he exited the building when the containment was ongoing throughout the day.”

Police were on scene at the retail store at 4:22 AM on Wednesday morning. They started the containment of the building then, when they believed he was still inside.

Timmins Inspector Michael McGinn says they don’t know in what direction he was heading, or how far he got. An inventory count at Canadian Tire hasn’t been done yet to see what is missing, but police say firearms were the target of the break and enter. They do think some guns are missing.

“The only information we have at this point is that there is one suspect involved, so no indication as to any other individual,”  explains Cantin.

Although there have been unconfirmed sightings in Timmins of the two homicide suspects wanted from Toronto, police say there is no evidence to connect them to the break and enter.

The investigation is being handed back over to the Timmins Police, as the OPP was brought in for tactical help. The public is being asked to take extra caution in the area.

Previous coverage of the story: Public Safety a Concern as Tensions Rise at Canadian Tire