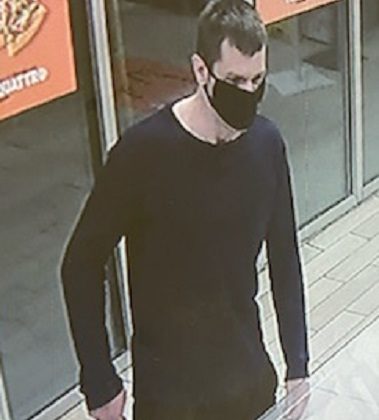 UPDATE 12:30pm Sat., May 15: Suspect arrested after a second robbery Friday night, this one at a convenience store on Mountjoy St.  Thirty-one-year-old Timmins man charged with two counts each of robbery with a weapon; possession of a weapon for a dangerous purpose; carrying a concealed weapon; and possession of property obtained by crime.  Also charged with theft under $5,000 in connection with a TV set stolen from an apartment on Main St., South Porcupine on Wednesday.  Suspect is in police custody awaiting a bail hearing Monday.

Someone robbed Little Caesar’s Wednesday night, and Timmins Police hope you can identify him.

The masked man walked in at about 10:30 waving a knife.  He got away with an undisclosed amount of cash.  No one was hurt.

He’s described as Caucasian with short dark hair; about six feet tall with a thin build and was wearinng a dark blue long sleeve shirt, black pants and black and white running shoes.

Police ask you to call them or Crime Stoppers if you recognize him.