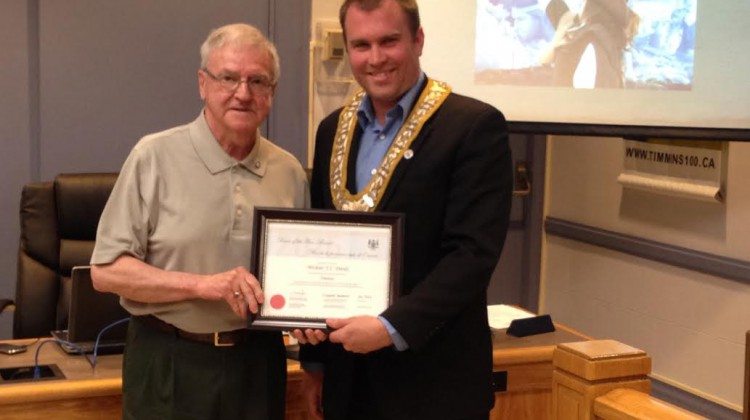 A local city councillor has been awarded Senior of the Year, from the Lieutenant Governor of Ontario.

Monday night’s surprise presentation, unbeknownst to Michael “JJ” Doody, honoured the veteran councillor with the award that is given out to someone over 65 who has “enriched the social, cultural or civic life of his or her community”.

Doody has been involved in municipal politics for over 30 years. During that time he has been the Mayor of Timmins, a city councillor, and he sits on multiple boards and committees, like the Cancer Society and the Golden Manor.

At the council table, Doody fights hard for the issues he believes in.

“I think that’s the secret,” says Doody. “I think you have to have a real belief in the things that you’re talking about, and standing up for.”

Doody talks about his work at the Golden Manor, where he has sat on the board off and on since 1970.

“So I have a background of people that go there, their families, and people that are there now who could not be in another, if I can use the word, institution,” says Doody. “They’re here, provided with quality care, and if you can’t fight for something like that, what else can you do.”

He says part of what keeps him motivated after so many years is the people he meets along the way.

“I say it often: we’re setting the bar for quality of life in our community very high,” explains Doody. “How fortunate we are to have people on an ongoing basis who think nothing of giving up some of their time.

He references his work with the cancer society, where he went from going door to door to being President of the Timmins area, and on the Board of Directors of Ontario.

“You meet such wonderful people who give up their time. We have so many of them in Timmins, and so many groups that are out there doing things for people. People you never hear of.

I don’t want to make it sound trite, but I really accept that accolade on behalf of all those people.”