Deputy Chief Ellard Beaven says flames started near a home on the property, and spread westward.

“No damage to the home,” he reports. “There was some equipment slightly damaged and some other piles of wood. We kept it away from some other cedar or any other equipment.”

The large response was because of water access issues, so all the tankers were needed to shuttle water.

“That’s all on a well system, so there’s no hydrants and there was no water source really close to it,” the deputy explains. “So we just shuttled back and forth from the nearest hydrant.” That hydrant is at the Timmins Pentecostal Church.

Beaven says there’s nothing suspicious about the fire. It’s been ruled accidental. 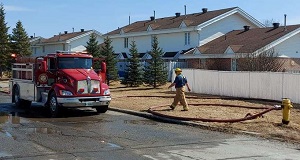 Water supply was an issue at the scene, so tankers filled up at the hydrant near the Pentecostal church on Airport Rd.
(Bob McIntyre, MyTimminsNow.com staff)