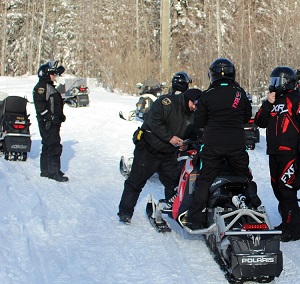 Again this winter in Timmins, it sounds like a billion buzzing bees,  when it’s actually snowmobiles with modified exhaust systems.  Up close, it’s much louder and disruptive.

“This constitutes an offence under the Motorized Snow Vehicle Act and it carries a $110 fine,” notes city police communications coordinator Marc Depatie.

He says most of the complaints come from Porcupine, where trails and fields are closer to homes. He says TPS and OPP  patrols are out to curb the chronic, persistent issue.

“These patrols when they locate a snowmobiler who’s operating a modified sled in terms of the muffler itself will be addressed to the full extent of the law.”

Depatie notes that trails aren’t officially open yet, including the portions of them that cross private property.

“When you use that absent of the trail being open,” he points out, “that is an offence under the Trespass to Property Act.” …so you could add a charge for trespassing to the one for the noisy muffler.