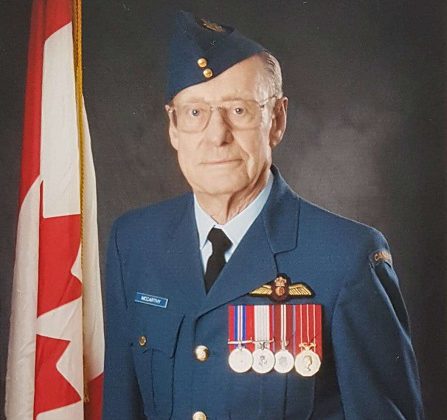 The man who was most instrumental in bringing the air cadet gliding program to the Iroquois Falls Airport has died.  Major Bill McCarthy was 95.

Major Andrea Villeneuve is commanding officer of the 792 Major W. McCarthy Royal Canadian Air Cadet Squadron in Iroquois Falls.  She has known Maj. McCarthy for over 30 years and says he would do anything for the squadron.

“He was directly involved in everything that we did,” Villeneuve comments. “He would show up on our parade nights. He would get involved and talk to the cadets, to the staff. Anything we needed him for, he was there for us, any time, anywhere.”

A long time director of the Air Cadet League, McCarthy was presented last year with a certificate commemorating his 50 years of service.

Villeneuve says McCarthy was very military and by the book, yet anyone involved in cadets with him remembers him as sweet and kind.

“He is a gentleman,” she says emphatically.” He is one of the nicest, biggest gentleman and most proud man I have ever met. And that is a fact.”

Villeneuve promises that once the COVID-19 pandemic clears enough, a ceremony to honour Maj. McCarthy will be held on a big scale.