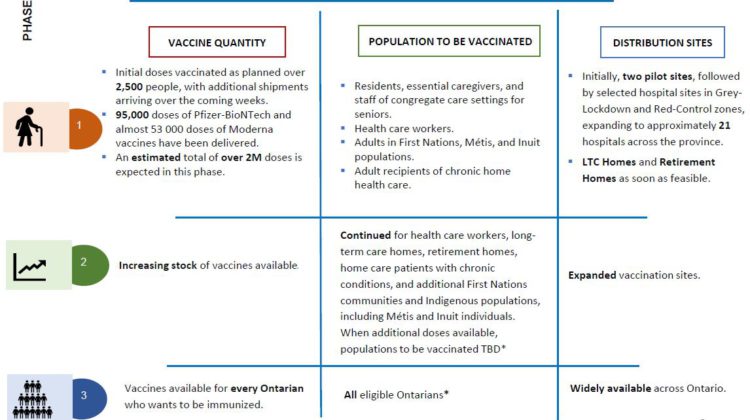 (Provided by the Ontario Ministry of Health)

Ontario is aiming to have all residents and workers of long term care (LTC) homes in the province’s hotspots vaccinated by the third week of January.

In a briefing held by the province’s COVID-19 Vaccine Distribution Task Force on Tuesday, officials announced that all residents, health care workers and essential caregivers at LTC homes in the priority regions of Toronto, Peel, York and Windsor-Essex will receive a dose of the vaccine by January 21st.

To date, 44 vaccine sites have been opened with over 50,000 people vaccinated with the Pfizer vaccine.

In addition, officials confirmed that the frontline health care workers who participated in the Pfizer pilot program in Toronto and Ottawa are receiving their second doses this week.

As for the recently received Moderna vaccine, the province confirmed nearly 3,000 doses were administered in 24 LTC homes by this past Sunday, with over 4,000 more doses expected by Wednesday.

The deliveries of the Moderna vaccine are anticipated every three weeks, to Toronto, Peel, York, and Windsor Essex, as well as three additional Public Health Units by Monday.

The task force said the Moderna doses in those four regions will be focused on vaccinating all LTC residents, staff and essential caregivers by January 21st.

The province is expecting nearly two million vaccine doses to arrive throughout the winter during the first phase of its vaccine implementation plan.