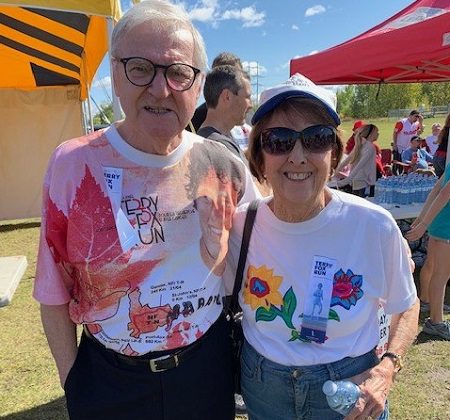 Mike Doody and Pat Onotsky plan to be among "Terry Foxers" planning to walk in the Terry Fox Run for cancer research next week for the 40th time each, marking the event's 40th year. (Photo submitted)

Formal events for this year’s Terry Fox Run aren’t allowed because of COVID-19.But it’s reasonable to predict that in Timmins, most people will be walking at Gillies Lake for next Sunday’s event.

And local coordinator Cathy Davis says that’s where you can show your support.

“Some of the Timmins Terry Fox committee members will be walking at Gillies Lake between 11 o’clock to 1 o’clock.  (If) anyone would like to drop off a donation in an envelope, we will be happy to send it to the provincial office,” Davis notes.

“We have a community that likes to give donations in cash or in cheque,” she adds. “So we thought that was going to be a little difficult for people to do it online. So we just thought well, we’ll be walking anyway, so if people want to just drop an envelope to us, we’ll definitely send it to the provincial office.”

This is the 40th year for the Terry Fox Run.  Davis hopes to hear from anyone who plans to participate for the 40th time on the Timmins Terry Fox Facebook page.