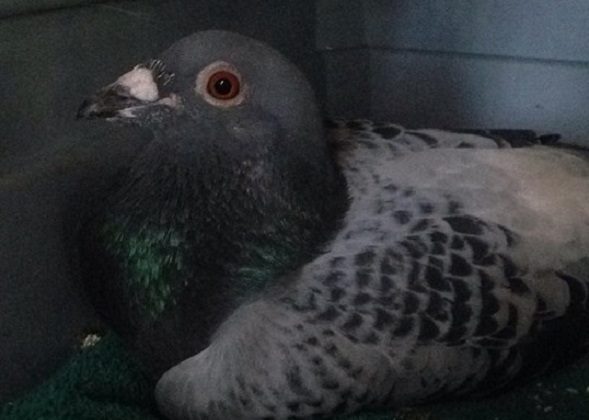 1177, the injured racing pigeon being cared for by Sue Giroux. (Photo supplied by Sue Grioux) 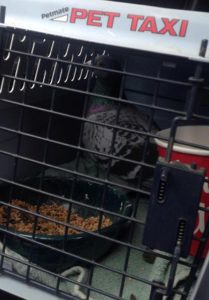 Two grounded racing pigeons are looking to hitch a ride home to the Toronto area, after crashing out of a race that began in Cochrane.

They both have wing injuries.  One is in Timmins, and the other was found on the property of Bite Me Bait and Tackle on Highway 11, just a short pigeon flight from the Iroquois Falls airport.

Sue Giroux is taking care of that one.  She got the owner’s name and phone number in Tottenham – about an hour’s drive from Toronto – by Googling information on the bird’s leg band.

The bird, however, has no name.

“No, I call him 1177.  That’s the number on his band,” she laughs. “The owner asked me if I could hold on to the bird for a while and see if maybe he’ll recuperate,” she says. “And he said if he does recuperate, he will fly home.”

1177 spends the day in an outdoor pen.  Giroux lets him out and he tries to fly, but ends up running on foot into the bush.

In case he doesn’t recover enough to fly home, Giroux is looking for a ride for him.  She says it won’t take major alterations to your car.

“I have a little cat crate that I put him in at night and he’s got his food and water in there and that’s just fine.”

Giroux finds it fascinating that pigeons are trailered up north a couple times a year.  The first one to fly home wins the race.