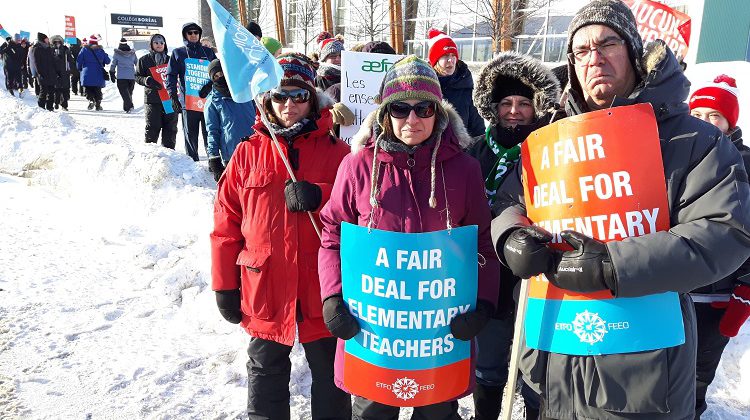 Pickets as far as the eye can see. Members of all four Ontario teachers' unions are on strike today, picketing in Timmins on Thériault Blvd., in the shadow of three schools. (Bob McIntyre, MyTimminsNow.com staff)

Strike action by teachers and other education workers has closed all publicly-funded schools in Ontario today.  So your kids have another three-day weekend.

All four teachers’ unions are flexing their collective muscle in a solidarity move to put pressure on the Ford government to negotiate a new contract.

In Timmins, the major picket line is on Thériault Blvd., in the shadow of TH&VS, ECST and R. Ross Beattie Senior Public School.  It’s a high traffic, high visibility area.

English Catholic students in our region also get next Thursday off.  That’s when rotating strike action by the union affects the Northeastern Catholic District board.

Chief Medical Officer warns young people they are not “invincible”