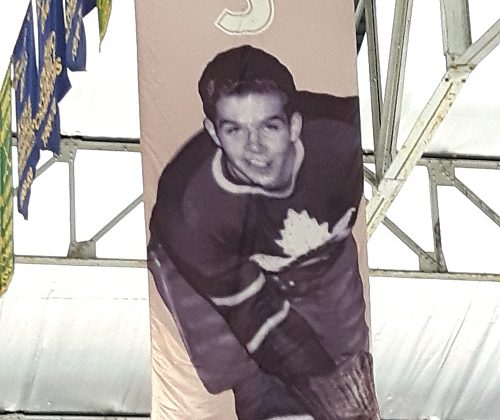 The banner that commemorates Bill Barilko, hanging from the rafters of the McIntyre Arena. (Bob McIntyre, MyTimminsNow.com staff)

A fundraising drive is underway to have signs honouring Bill Barilko put up at the entrances to Timmins.

The Timmins hockey product scored the Stanley Cup winning goal for the Toronto Maple Leafs in 1951 only to disappear on a fly-in fishing trip north of Cochrane that summer.

The first fundraising event is a dinner at the sports hall of fame at the Mac on February 14th.

Chairman Kevin Vincent says the hope is to have two signs.

“And that’s the ideal plan,” he comments.  “If we end up that we only go with one, then we’ll go with one, but the plan is to have two: one at the east end and one at the west end.”

Vincent was part of the expedition to retrieve the wreckage of the plane in 2011. He says some of it will be on display for the first time at the dinner.  There are plans to permanently display all of it.

“We’re looking at doing something within the city of Timmins, perhaps something in partnership with Maple Leaf Sports Entertainment at the Air Canada Centre and then of course something perhaps at the Timmins Airport,” says Vincent.

Also at the dinner will be Leafs and Barilko memorabilia. Vincent says its owner, Mark Fera, is one of the largest collectors of Leafs memorabilia in the world.