People have lived in the Timmins area for thousands of years 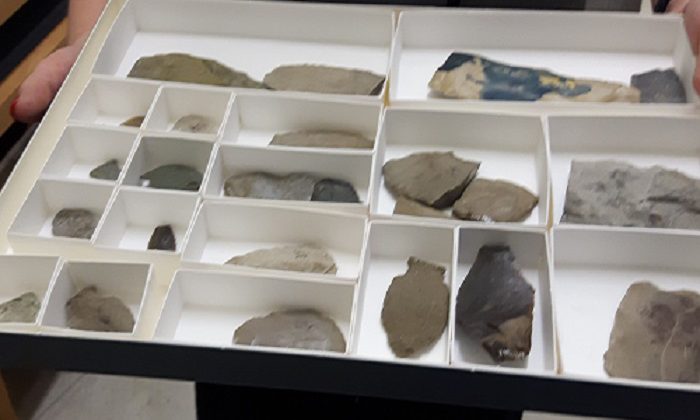 Some of the artifacts from the Fretz Site that will be in the permanent gallery at the Timmins Museum. (Bob McIntyre, MyTimminsNow.com staff)

It’s no surprise that there were Hudson Bay fur traders in what is now Timmins back in the 16-hundreds.

However, Timmins Museum director-curator Karen Bachmann says people were here long before that.  She backs that up with a big find of artifacts at what is now known as the Fretz Site on the Nighthawk Lake system.

“And what was uncovered there were a number of pieces that date us back to 5,000 years ago,” she says. “There is actually settlement in this area going on from that period.”

A lot of those artifacts – stone implements, arrowheads and axes – are at the museum, where they’ll be incorporated into its new permanent gallery.

“There are a couple of pieces that are really different from other things that are there, that red gouges and those kinds of things, not from the rock from this area,” Bachmann explains. “So again, that endicates that even that far back, there were trade routes that were happening from Southern Ontario indigenous, Northern Ontario indigenous people and those kinds of things were developing.  So those are trace elements that are still around and tell you those stories.”