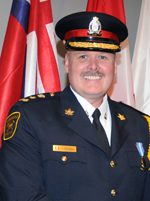 The bill for Police Chief John Gauthier’s 2013 legal fees has been released. Although it is not required, Gauthier gave the go ahead to have the numbers given. Over $19K was spent during the OPP investigation into Gauthier allegedly withdrawing tickets. That represents 8% of the board’s budget for legal issues. No costs have been released yet for the current investigation of Gauthier. It is still the same issue, but now the Ontario Civilian Police Commission is the one investigating. Gauthier will have a hearing at the end of March. If found guilty, he will pay for his own fees.