Halloween haunted house on Toke St. guaranteed to scare you

"Let's be honest, clowns are freaky." So says Marc Lacroix, who has built a haunted house in his yeard at 395 Toke St. (Photo submitted by Marc Lacroix)

If you’re been hearing more things that go bump in the night on Toke Street, they could be coming from the haunted house under construction at 395 Toke.

It’s the Halloween project of realtor Marc Lacroix and a group of friends and relatives.

My kids kind of just made a joke about if you’re going to sell houses during the day, maybe we can have a haunted house at night,” he says.

So on Halloween night starting at 7:00, the haunted house will be open to anyone brave enough to enter.  You’re asked to bring a voluntary food item or cash donation for the Timmins Food Bank. 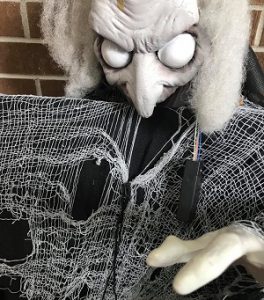 One of the creepy things you’ll encounter Halloween night… if you dare.
(Photo submitted by Marc Lacroix)

Lacroix says he’ll gauge by the age of people entering, how high the scare factor will be ramped up.

“The best kind of scare is a misdirection scare,” he explains.  “And that was kind of the theme going in.  If you’re looking one way, be ready the other way.”

Lacroix says two girls who went through to test it, ran away screaming.

“It’s got a creep factor to it,” he says.  “By that I mean there’s some clowns in there and clowns – let’s be honest – clowns are freaky.”

Lacroix won’t say much more, not wanting to give too much away.