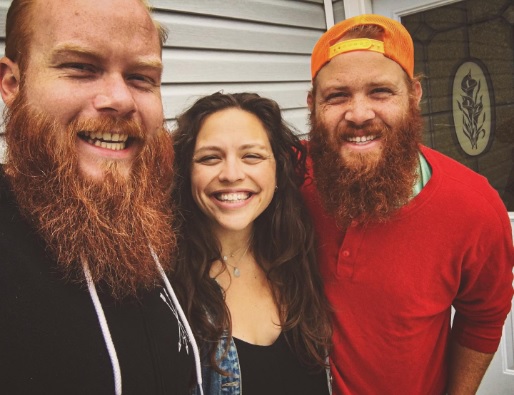 This is Piper & Carson, and they are good people.

As are most of the people who perform at the Timmins Summer Concert Series, but few bands have had to battle the elements quite like Piper & Carson have had to.

On Wednesday, August 21st, Piper & Carson, who come from a small town just outside of Hamilton, Ontario, were set to perform their first of two concerts at the Timmins Summer Concert Series. The night was set to be a beautiful one, as the scheduled rain in the forecast looked as if it was going to hold-off. After introducing the band, and giving props to the amazing beard that Carson had, Moose Mornings with Tom gave the stage to the duo from the South. But, as soon as they began, the weather took a turn for the worse.

Despite the rain and wind that came, Piper & Carson continued to play to the brave crowd who remained in the rain. The organizers had to call the event after too much rain, and the Timmins Summer Concert Series had to be wrapped up after only 30 minutes of Piper & Carson’s performance. Not to be deterred by the rain, Piper & Carson asked the organizers, as well as myself, as to where a good spot to setup a tent would be. “A place to setup a tent? In the rain?” I thought to myself. “I know a warm, dry place they could stay!” So I told Piper & Carson that they could stay with me! Their thanks was emphatic, and all Carson could say was, “Your name was Tom, right?” That’s right, I had forgotten to introduce myself before I had invited these strangers into my home, but it turned out to be the right decision!

Timmins thank you for the love! We had a great time sharing music outdoors in McIntyre and Bannerman park. The first night we got rained out, but it was amazing to see the brave humans who weren’t ready to leave until we had to call it off. We now have friends in this lovely community and are super grateful to @thomasschenck for getting us out of the rain and putting us up these last few nights. On the road again and heading south to Elk lake. We’ve got good things coming up this weekend and just found out we are sold out for our show in Haileybury at Cafe Meteor 🤗 Feeling full of love and connection on this (southern) northern Ontario journey. Sending love to all our friends in all the places. We can’t wait to catch up soon and share stories… . . Aug 23 – Elk Lake – #LakesideLeisureFarmTrailerPark – 4-7pm . . Aug 24 – #TemagamiCommunityMarket – 10-12:30pm . . Aug 24 – Haileybury – @cafemeteorbistro – 9pm . . #folkmusic #lifeonthroad #timmins #elklake #haileybury #temagami #northernontario #livemusic #piperandcarson #itsgonnabehottour #folkroots

There were only two worries I had about inviting Carson back to my home…was my house clean? Do I have food? Those issues were solved very quickly!

Piper & Carson followed me back to my place, where we made dinner together with the combined food we had. Starting as a simple pasta and sauce, we quickly added peppers, onions, garlic, beans and spices from our combined food stores. We talked of their adventures, from Columbia to Edinburgh to across America, and more! It was a pleasant surprise to hear that some of their favourite spots, though, were the little towns and camp sites they saw along the way. Piper & Carson had just spent about a week on the shores Lake Superior, and they marveled at the seemingly-untouched and uninhabited landscape before them. They had stayed with family, on campsites, at artist retreats, and all the while looking for where their adventure would be taking them next. We stayed up, talking for hours, as if we were old friends reuniting, and not people who had just met a few hours before.

The next morning, after a quick grocery run, we shared breakfast and more stories and tales. That night, at Bannerman Park, we finally got the performance from Piper & Carson that we had been waiting for. To put it lightly, the audience was impressed. After sharing the story of how we had spent the previous night, Piper & Carson were inundated with requests and invites to stay at other people’s homes. It was amazing to see so many people step up and offer a warm place to sleep for this duo from the south. However, I was very happy to hear that they would be spending another night with me.

And so, on Friday, we said our “so long’s”, as a “goodbye” always seems so finite. So to Piper & Carson, I say, “So long for now, but we will see you again!” From this experience, I have learned that you never know what you may learn or experience when you help out people in need. Piper & Carson needed a warm place to stay, maybe somewhere to wash the road dust off, and have some time to relax. What I didn’t realize at the time is: good company is what I needed. So if Piper & Carson come knocking at your door, let them in! You won’t be disappointed by their kindness, grace, talent and stories from the road.

Until next time, Piper & Carson!

If you would like to follow Piper & Carson’s journey, the best place to do so is by clicking on the link HERE!