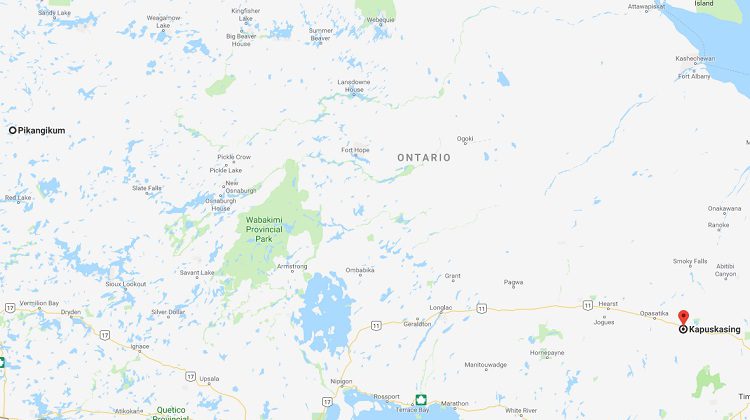 Residents of Pikangikum are flying 860 km to Kapuskasing to escape a forest fire near their community. (Google Maps)

Residents of both Kapuskasing and Pikangikum are feeling a sense of deja-vu, as people from the First Nation community in Northwestern Ontario fly back into Kap.

They only went home three weeks ago, after spending three weeks in Kap to escape a looming forest fire near their homes.

Town of Kapuskasing CAO Guylain Baril says 147 people were flown into town on the weekend.  This time, Kap’s capacity for evacuees is 300,  down from 750 earlier.

“We were scheduled to receive all of them over the weekend, but the flights were having some difficulty landing in Pikangikum,” Baril outlines. “There’s some pretty severe smoke and ash or fly ash situation and a lot of the flights were cancelled not only for us but other communities as well.”

The people from Pikangikum will stay in hotels in Kapuskasing, and be fed three meals a day and snacks at the Civic Centre.

Baril says the most difficult part is keeping them occupied.

“When we travel out of town, there’s a purpose,” he says.  “But for them, it’s just to pass time until their community is safe to return to.  So for kids, for example, we try and organize craft days, we have inflatables brought in from time to time to burn some energy, we have movies and the pool that we open up for them.”

All the costs are covered by the federal government, along with an administration fee to the town.

Timmins is not scheduled to receive any Pikangikum evacuees.

New modelling shows a Fall Peak of COVID-19, virus could be with us until 2022