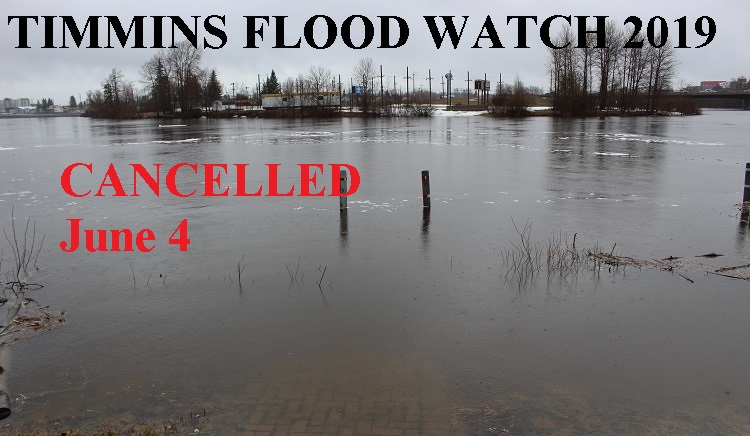 The text from a news release put out late Tuesday afternoon, June 4:

The Timmins Flood Advisory Committee (TFAC) reports that the Flood Watch for the
Mattagami River has been cancelled. Water levels continue to drop.
This year, with the large snow pack melt and precipitation received, we experienced an
abnormally large volume of water throughout the Mattagami watershed and across the
region in general. The challenge faced by the Timmins Flood Advisory Committee was
how to move the water through the system while mitigating impacts of the high water
through the City. By effectively using the limited storage reservoirs upstream of
Timmins, the committee was successful in ‘staging’ as much of the water as possible by
passing higher flows for an extended period of time, while storing water when snow melt
and runoff were peaking. Once snow melt and precipitation had begun to taper off, flow
in the river was kept high as we brought the storage reservoirs upstream to more normal
levels for the season.
Decisions around how to manage the high flows were made on a daily basis, as a
collaborative effort by the TFAC, which includes the Mattagami Region Conservation
Authority, Ontario Power Generation, the Ministry of Natural Resources & Forestry and
the City of Timmins.
The TFAC would like to thank those who provided contributions to the Committee, as
well as residents who provided important feedback throughout the high water event.
Water levels will continue to be monitored and the Committee will be called together
again should any concerns arise.