Until you notice the yellow caution tape at the front door, you would have no idea there was a major fire inside East Side Mario's. (Bob McINtyre, MyTimminsNow.com Staff)

UPDATE MAY 27, 2019: Deputy Beaven tells My Timmins Now Dot Com that the Fire Marshal’s Office and Timmins Police have completed their investigation, and all evidence points to an accidental electrical fire.

Until you notice the yellow tape across two chairs propping the front doors open, you’d have no idea that there was a major fire at East Side Mario’s this morning.

Firefighters experienced heavy smoke inside, making their way to the flames in the kitchen.

“It was actually extinguished pretty quick,” Beaven reports, “but in the meantime it caused severe smoke damage throughout the restaurant. 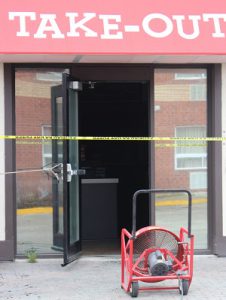 A fan blows fresh air into East Side Mario’s through the take-out door on the west side of the building. (Bob McIntyre, MyTimminsNow.com Staff)

“So right now we’ve notified the Ontario Fire Marshal, because it falls under the criteria of exceeding $500,000 because of it being a commercial building and the damage that it did throughout the restaurant.”

An electrical engineer has also been called in.

Beaven emphasizes that the blaze has been ruled accidental. 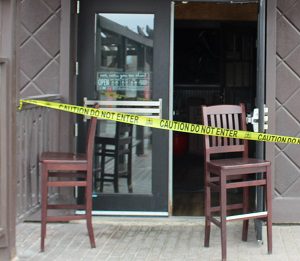