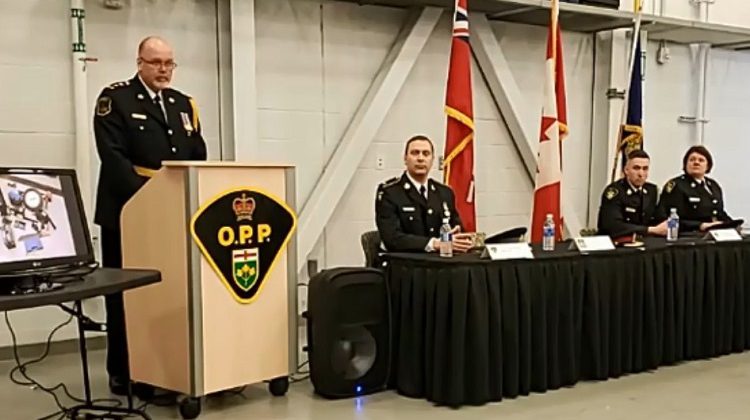 The OPP and Timmins Police are heralding what they call “a property crime enterprise that is effectively dismantled”.

A joint investigation into 60 break-ins between September and December resulted in the arrest of five Timmins people; 250 criminal charges; and a quarter-million dollars in stolen goods being returned to their rightful owners. Those are from homes and cottages that police say were often cleaned out.

Timmins Police Chief John Gauthier is effusive with his praise for investigators from both agencies.  He says the outcome sends a simple message to criminals.

“That there are serious and dedicated police officers who are diligently focused on locating criminals,” he comments, “and having them held to account for the destructive nature of their actions.”

OPP Acting Detective Sergeant Mark Donnelly says a lot of the items stolen from cottages and rural homes were put up for sale on social media.

“If you purchased items on Facebook between September 2018 and December 2018 from any of (those arrested and charged),” Donnelly advises, “ or from someone by the name Patrick Paul Ferrari, which we believe is an alias used, you may have purchased stolen items.  We don’t believe anyone by that name exists.”

A computer believed to be used to sell the goods has been seized.  So has a pick-up truck that investigators say was used as a look-out and to move the stolen items.

NOTE:  This story has been edited from a previous version.  The number of break-ins is 60, not 92 as stated earlier.