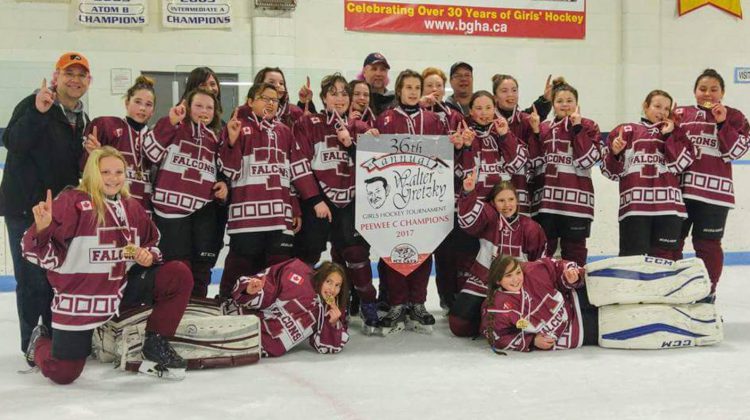 A memorable weekend for several teams from our Timmins & District Girls Hockey Association. Both the Propipe Pee Wee Falcons and the Kiwanis Midget Falcons brought home medals from the 36th Annual Walter Gretzky All Girls Hockey Tournament. The Propipe Pee Wee’s won the Gold in dramatic style, defeating South Huron in an OT Shootout. Kyla Small scored the eventual shootout winner. And the Kiwanis Midget Falcons earned the Silver, losing to the Hamilton Hawks in the Midget Championship Final, 6-1. The Kiwanis Falcons were the only team to score on Hamilton during the entire event. The Falcons earned the right to play in the Final by beating the host Brantford Ice Cats 4-0 the night before. The Propipe Atom Falcons were also at the tourny, losing in their semi-final to the Lambeth Lancers , 5-4 in OT. Association President Renee Fleury says, “Extremely proud of the teams that represented TDGHA. The competition was tough and our girls never gave up. They definitely put themselves on the map. Players had fun, their development proven and scouts were out. This is a huge step for the Association, showcasing our Female talent”. Kiwanis Midget Head Coach Pete Montana adds, “After our 4-0 win over the Ice Cats Saturday night, I spent 45 minutes talking to scouts about several of our players. It’s the biggest reason we maintain a Midget A Program. So these players can travel to tournaments in the south and get the exposure to Midget AA, PWHL and University Scouts. They rarely if ever come North. And they aren’t interested in watching Midget B or C. We couldn’t be prouder of all of our Female teams.” You can learn more about the TDGHA and it’s Programs and Teams here.