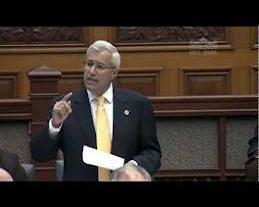 The MPP for Nipissing doubts a Private Member’s Bill stopping politicians from asking for bribes to run for office will become law.  Vic Fedeli believes the Bill from New Democrat Gilles Bisson will die at the committee stage even though it passed second reading.  Once everyone learned it’s not illegal to ask for a bribe, Fedeli says the Liberals themselves should have taken the first steps to rectify this.   With the Christmas break coming up and MPP’s away from Queens Park until February, Fedeli believes the Liberals hope people will forget about the proposed bribery legislation.  It’s alleged that Sudbury MPP and energy minister Glenn Thibeault asked for a bribe to leave the federal NDP and run for the provincial Liberals.  Thibeault was never charged because his alleged request isn’t illegal under the Elections Act.