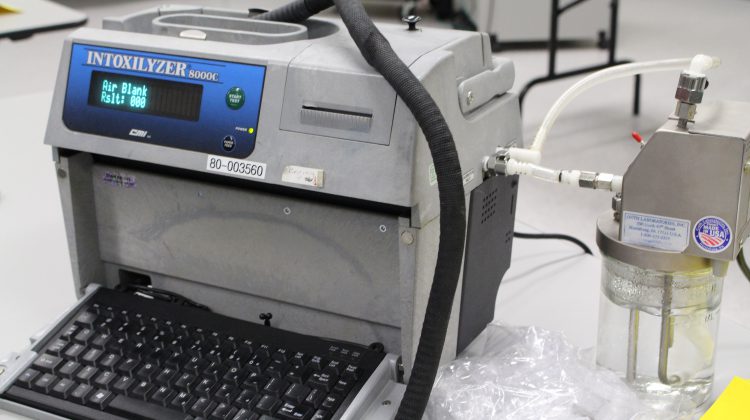 Photo: The Intoxilyzer 8000-C, which is the same unit officers will train on and work with after being certified. Supplied by: Taylor Ablett.

Police officers from across the north are gathering in Timmins this week to go through a week-long breathalyzer training course. Local and neighbouring officers are at the station to be certified to test suspected impaired drivers.

Communications Coordinator for the Timmins Police, Marc Depatie, says the officers are training in a real-world situation, with test subjects. The subjects were drinking in a controlled environment, before providing breath samples. Depatie says once the officers pass the course, they will be qualified Intoxilyzer technicians. The training at the police station is being done by technicians from the Centre of Forensic Sciences.

Depatie says they train officers in the real world situation because it makes for better training, with the same technology used at the station.

The Timmins Police station has the facilities to allow multiple officers from across the region take part in the training. Depatie says that training goes year-round, and those who are qualified technicians will have to re-qualify once a year. He says that means the officers are always up to date on things like the most recent case law, any changes with technology, and defences brought forward by lawyers for those charged with impaired driving.

The officers are training on a breathalyzer called the Intoxilyzer 8000-C, which Depatie says is cutting edge and state-of-the-art technology. It is used to interpret breath and a person’s blood-alcohol content. Depatie says that is a vital tool in stopping drinking and driving in Timmins. He says even modest amounts of alcohol will severely affect a person’s faculties and ability to make responsible decisions.

Overall, Depatie says this makes for a better trained police force in Timmins, and one that is better able to respond to the demands of modern policing.