Local firefighter creates a portable fire hydrant, for when none are available 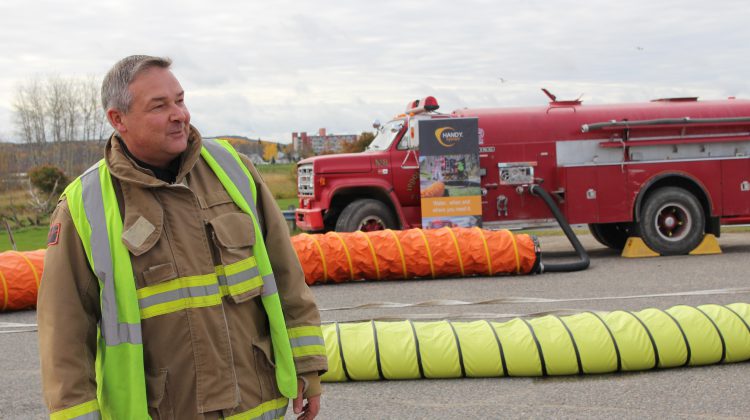 A local volunteer firefighter has created a portable fire hydrant, to help attack blazes in rural, Indigenous, and wildlife locations. Brian Nankervis says the idea was sparked after he witnessed firsthand the frustration when no fire hydrants are available in an emergency. He says the whole premise behind Handy Hydrant is securing a water source in an area when none exists. He says there are a lot of cottages and rural areas in the north where no fire hydrants are available.

Nankervis says the Handy Hydrant can either be filled by the firetruck, or by a a nearby water source, like a river or lake. He says that makes it versatile, allowing the first responders to move around to where they need to be in order to attack the blaze. He says it’s easily transported; it can be put in a trailer, in the back of a truck, or carried in a backpack. It also comes in many different size options, allowing for each unit to work with what they need. Multiple Handy Hydrant’s can be hooked up together in order to create a heavier water source.

Nankervis says although his primary use is for fires, it can be applied to other situations as well. That could be the construction and agriculture industries, third world countries, or for oil separation when there is a spill.

Nankervis is acknowledging the help from northern Ontario to get this project off of the ground, and says part of the reason why he created the Handy Hydrant was to help promote the area. The Product and Innovation Centre in Timmins, and the Northern Ontario Angels helped to turn the idea into reality.

More information can be found on the Handy Hydrant website.