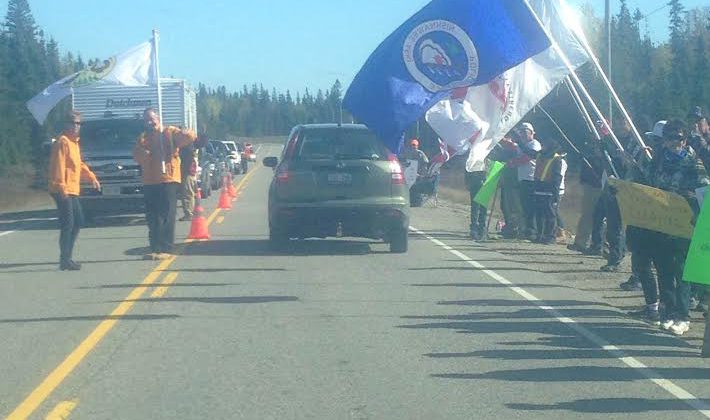 Photo: Some of the protesters on Highway 144 over the Thanksgiving weekend. Supplied by: Will Morin, Moose FM.

France Gelinas is yet again fighting for Gogama at Queen’s Park. This follows a crusade from the Nickel Belt MPP to get support from the province to have last year’s oil spill fully cleaned up. Gelinas says she is back to lobby the province after the residents of Gogama and the Mattagami First Nation protested on Highway 144 a couple of weeks ago. She says those residents have reached their tipping point, and they aren’t alone. Gelinas referenced a petition that thousands of people have signed from 81 different communities, including Timmins. She says all of those people are urging the government to act now.

Gelinas says a lot of the oil still hasn’t been cleaned up, and time is running out with winter just around the corner. She says the oil in the Makami River needs to be cleaned up before the snow hits, and the water freezes over. If that happens, the water could be carried down the river even further , making it harder and harder to fully clean. She says anyone who takes the time to visit the Makami River will be able to see the dead fish,; and if you throw a rock, you’ll see the oil coming to the top.

The Minister of the Environment, Glen Murray, says they will order CN to clean up the river, but it won’t be immediate. He says there is a process they have to go through. Studies and assessments required from CN have to be reviewed and assessed by the ministry. Murray also notes the proper testing has to be done, as a lot of the oil will be in sediment, and the removal of it has to be done carefully. That process also has to fully involve both Gogama and Mattagami First Nation residents, according to Murray.

This all stems from two train derailments in Gogama last year, in which over one million litres of crude oil spilled into the Makami River.

Photos: Showing some of the damage done by the derailment, including the rail cars in the river.