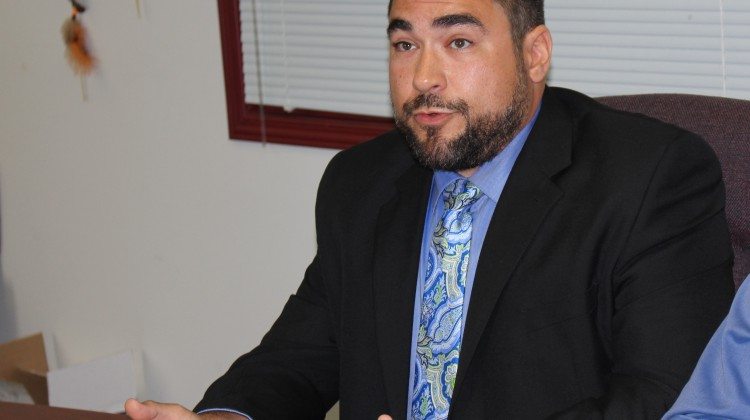 NAPS Officer, Jason Storkson, explains how the lack of funding affects the health and safety of the police force. Supplied by Taylor Ablett.

The Nishnawbe-Aski Police Service is calling on the federal and provincial governments to better support their operations. NAPS claims they face discriminatory underfunding, and are threatening to strike if changes aren’t made.

Union President and NAPS officer, Jason Storkson, says not only do they make 20 per cent less than their OPP counterparts, but their health and safety is at risk. He also points out NAPS operates with a budget of $27 million a year to serve 35 communities. Half of that goes into their flying budget, which means they actually operate with a budget of around $13 million a year. That is compared to the Timmins Police Service who operates on around $17 million a year to serve one community.

Storkson says the majority of those 35 communities are patrolled by a single officer unit, something that doesn’t happen anywhere else in Canada. He says their safety at risk, since only one officer is on duty at a time, it could be hours before backup arrives in an emergency. He says there have been cases where officers have been shot at, and it takes six hours for backup to arrive. He calls that the scariest situation an officer can be in, and a six hour wait is unacceptable.

The Regional Executive Vice President of Ontario for the Public Service Alliance of Canada union, Sharon DeSousa, says the fight is not about the money. She also points out it’s about the health and safety of their officers. She says those issues are getting larger and larger, and officers are putting their lives at risk. She also notes there are mental health issues with post-traumatic stress disorder. She says a couple of police officers have even committed suicide.

Storkson says it’s especially frustrating when the government says they will spend up to $200 million to take over their duties with the OPP, if NAPS does go on strike.

Timmins-James Bay MPP Gilles Bisson says policing is an essential service in our society. He says that is especially true in the far north when there is no one else to call. He says this NAPS crisis has been brewing for quite some time, and he will do his part to push for extra funding with the province. He asks how they expect 35 communities in the far north to run on a policing budget of $27 million a year, when municipalities like Timmins, Sudbury, and North Bay work on a very different funding formula to support police officers and their communities.

The union is now calling for a meeting with a conciliation officer, who will bring both parties together to try and mediate a settlement. If those talks break down, the police unit could be on strike before the end of August.