ORA: 16 rail cars worth of oil could leak into waterways if pipeline detection system isn’t upgraded 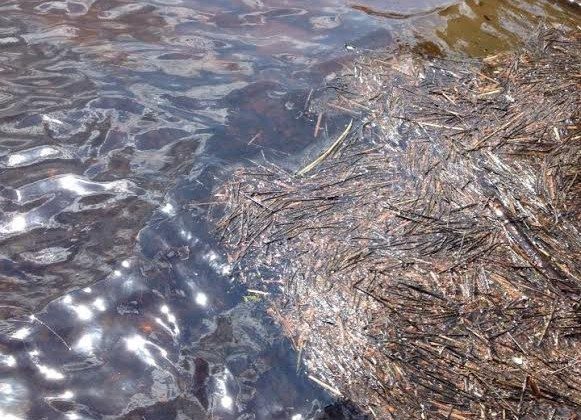 Photo: Oil spilled in Gogama after a train derailment. Supplied.

A Sudbury based lobby group is getting some input into the Energy East Pipeline project. The Ontario Rivers Alliance works to protect waterways across the province, to ensure healthy ecosystems. The ORA has now been granted Intervenor status in panel hearings regarding the pipeline.

Chair of the ORA, Linda Heron, says that means they’ll be able to express their concerns, and have been granted $40,000 from the National Energy Board to make their case. One thing they’ll be looking at is exactly which waterways will be affected by the pipeline. She says Trans-Canada only listed a small number that would be impacted, and so the ORA has hired an expert to find out exactly how many lakes and rivers will be affected, and to name them all. Heron says that will give them a comprehensive list of the more than 2,000 waterways that will be crossed by the pipeline.

Heron says another thing they will be pushing for is a more sensitive oil-leak detection system. She says they have concerns with pipeline integrity, because an oil spill or leak can have a big impact on our freshwater supply, and therefore the communities that depend on that water. As it stands right now, Trans Canada can detect a 1.5 per cent leak in the pipeline, which is 42 inches. That means it is a 2,000 cubic metre leak, which is equivalent to around 16 rail tanker cars full of fuel spilling in one day.

Heron says anything under that could go on for hours or days without being detected. She says they want to see the standards fine-tuned, so a much smaller leak can be identified. She says the best case scenario would be to have assurance the pipeline is safe, and will not impact communities.

The panel hearings the Ontario River Alliance has been granted Intervenor status begin in North Bay and Thunder Bay in the fall. More information about the ORA and their work on the pipeline project can be found online, on the Ontario Rivers Alliance website.