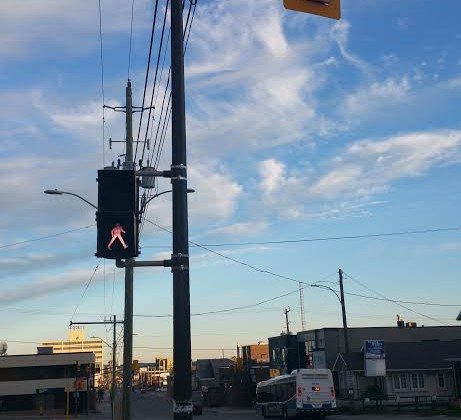 The timing of the walk signals along Algonquin are being increased. The crossing signals have been bumped up to last ten seconds longer, on the request of the Municipal Accessibility Advisory Committee. The group came to council last night saying the current timing, which is set for around 25 seconds, is not enough to get across the road safely.

MAAC says 25 seconds is the standard or minimum number, which Councillor Noella Rinaldo says is not good enough. She says she didn’t become a Councillor to be standard or minimum, and is tired of that classification. Rinaldo says it’s time for priorities to shift to pedestrian safety; whether you’re a mother with a stroller, someone with a disability, or a senior. She says if you’re driving from South Porcupine to the mall, you are going to be on the highway that goes right through the middle of Timmins.

“Enjoy the view, we’re slowing you down,” says Rinaldo.

Councillor Rick Dubeau was also a big supporter of the change, citing many passages from Vision Zero. That is a multi-national road safety program which has a goal of zero fatalities or serious injury in road traffic. It began in Sweden in 1997. Dubeau says the street system should be safe for all users, for all modes of transportation, and for people of all ages and abilities. He says human life takes priority over traffic flow.

Council voted during a special meeting last night to change the timing. They approved the ten second increase for the walk signals in each direction. That increase will be gradually phased in.