Timmins doing its part to keep illegal Fentanyl off the streets 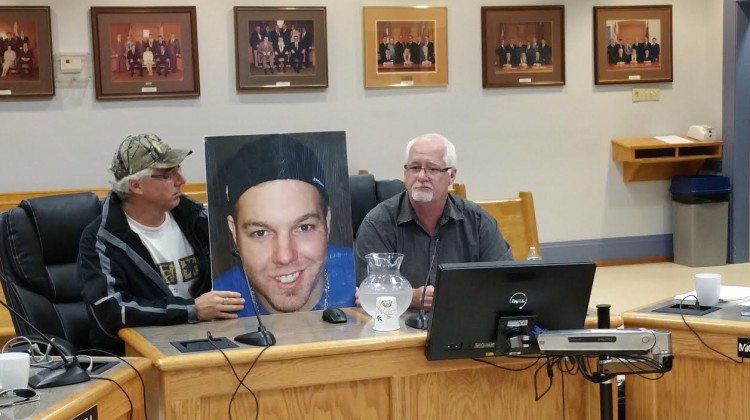 Photo: Tim McKinnon and Jeff Martin with a photo of Scott McKinnon at city hall. Supplied by Taylor Ablett.

The city is trying to get illegal Fentanyl patches off of the streets. Timmins is the latest in a string of cities to support the patch-for-patch program. Jeff Martin spoke to council on Monday night about his nephew Scott McKinnon who died from a Fentanyl overdose at 26-years-old. He has been spearheading the initiative to bring the patch-for-patch program into the city, saying he wants to make a difference.  He says he wants to help the community and young people like Scott, who made one mistake that cost him his life. He says there are other kids doing the same, and this resolution from council will help get them to their final goal. He says his brother Tim, who sat with him at council, lost a big part of him when his son passed way.

Councillor Mike Doody says this issue has become too prevalent across Ontario. He says Fentanyl patches are being used in a destructive way, for profit. He says they’re not being used for the intention they are provided for, which is to help people. The patch-for-patch program has patients return their old Fentanyl patches before getting a prescription refill.

City council passed the resolution on Monday to support the program. The Timmins Police Service and the local OPP detachment are already on board with the program.