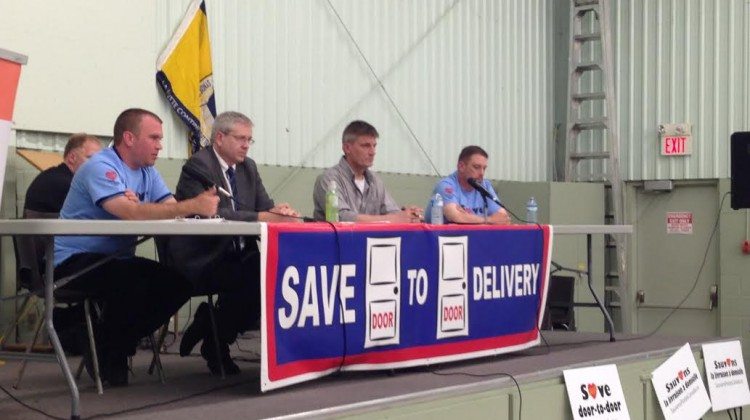 That was the message around 170 people left St. Dominique’s with last night, after a town hall meeting to save door to door mail delivery. Spearheaded by our local New Democrat MP, Charlie Angus, the meeting heard many opinions and concerns about community mailboxes. Angus says this is a growing campaign, and the Northeast needs to work together.

“You can feel the energy in the room tonight. This is an issue that people in Timmins feel passionate about,” says Angus. “I think the government made a huge mistake. They thought, ‘ah people aren’t going to care, we’ll just push this through, people will roll over they’re used to getting pushed around on these issues’. Uh uh, they made a big mistake.”

The Timmins-James Bay MP says that mistake is going to cost them at election time.

“We’ve been down this road before. We saw it with how they drove Hydro into the ground; the ONTC, drove that into the ground. We see it with the privatization of road service. Northerners aren’t stupid, they know when they’re being had.”

During the town hall it was noted that the President of Canada Post, Deepak Chopra, makes upwards of over $500, 000 a year. That doesn’t include bonuses, which were never fully  released to the public, but estimated to be around 30% of his salary.

“The heads of Canada Post have been predicting year after year these colossal losses, and yet year after year they’re making a profit,” explains Angus. “Now suddenly they tell us all across Canada, every jurisdiction, they gotta stop mail delivery and somehow the system is going to get better? I don’t buy that.”

Taking his own turn at the mic, and speaking to the crowd, was Federal Liberal candidate Todd Lever. His message was that Liberal’s are on the same page as the NDP, and want to save home delivery.

“The Liberal party has gotten the message on this issue,” explains Lever. “I think it went a long way to developing our policy on this issue, which is to stop Stephen Harper’s program to end door to door mail.”

He says the community needs to keep fighting this fight, and standing together will make a difference. Lever reiterated that Canada Post isn’t losing money. He says they may be fixing the books to make it look that way, but it isn’t the case.

Many examples were pointed out during the meeting, that showed the corporation was reporting losses in the hundreds of millions, when really they were making profits.

“The entire thing [ending home delivery] is based on a report that was put forth by the Conference Board of Canada,” explains Mark Evard, the Central Region National Director for the Canadian Union of Postal Workers.

“In the Conference Board report for the year 2012, they forecast a loss for Canada Post of $250 million,” continues Evard. “In actual fact, Canada Post made a net profit of $94 million that year, and a profit from operations of $131 million. So they weren’t far off, only about $360 million.”

He goes on to say the entire plan is based off of this report, which forecasted these same losses all the way up to 2014, where a $400 million loss was predicted. They actually made a profit of $198 million, and a profit of operations of almost $300 million.

Mayor Steve Black says this is more than just a politics issue for him.

“The politicians are obviously going to make it political issue going into the election, and campaign on it for a certain portion of the parties, and others may not want to talk about it too much,” explains Black. “For me, it’s really a community issue. I had to be there to hear what the community felt and make sure that any concerns from the residents could be brought forward to me that I can pass on to the Canada Post staff, if they were new or different than what we’ve already discussed as a city.”

Black says that his opinion is that Canada Post is targeting Timmins as the first city to end home delivery to avoid a mass upset.

“It is important for those who haven’t had it rolled out look at it, and look that it’s coming. So they should step up and support those who it has been already, or else their city will be next.”

The expert panel agreed that putting the political pressure on will help to make a stand, and that the North has to come together in order for there to be a change.