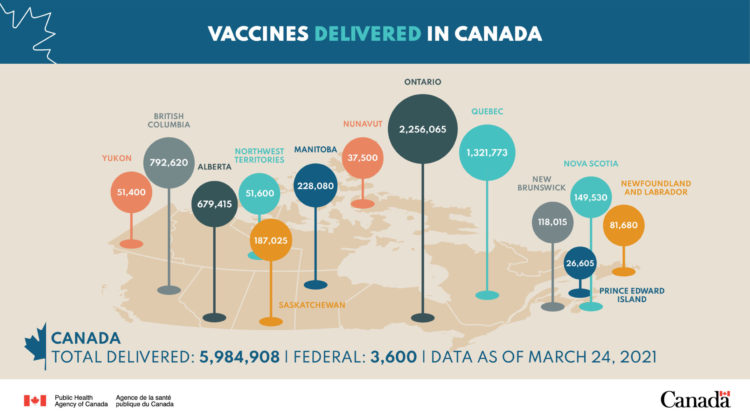 Photo provided by the Public Health Agency of Canada

No unexpected COVID-19 vaccine safety issues have been identified in Canada to date according to Health Canada.

This comes in light of Wednesday’s updated product label for the AstraZeneca and COVISHIELD vaccines reflecting rare reports of blood clots and low platelet counts.

In a press conference the next day, Deputy Chief Public Health Officer Dr. Howard Njoo said while there have been some reports of these blood clots in the European Union, so far, these serious events are very rare.

Dr. Njoo said that to date provinces have administered over 300,000 doses of the COVISHIELD-AstraZeneca vaccine with no reports of blood clots in this country.

Over 4.3 million doses of COVID-19 vaccines have been administered nation-wide as of Thursday.

Dr. Njoo said more than 11 percent of eligible Canadians over the age of 18 have received at least one dose.

Canada is also set to receive over 16-million vaccines between April and June.

The Head of Vaccine Logistics, Major General Dani Fortin confirmed over 12 million vaccines will be arriving from Pfizer-BioNTechalone.

Fortin also said this week’s deliveries of 846,000 Moderna doses were divided into two

One is currently being delivered to provinces and territories and the other is expected to arrive Saturday for distribution next week.

He also confirmed the 1.5 million AstraZeneca doses from the U.S. are expected to arrive next week.

In addition, the Serum Institute of India is set to deliver over a million AstraZeneca doses in April and half a million in May.