New welcome and street signs on the way 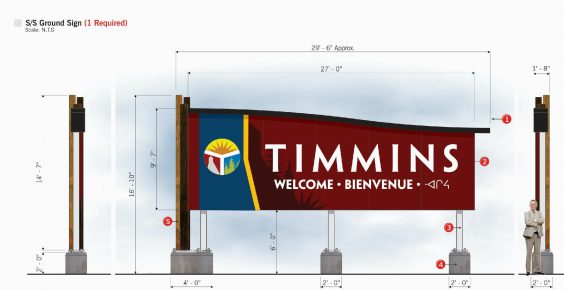 A design for the gateway signs coming into Timmins has been revealed. City Engineer Luc Duval updated council on Monday night about the progress on the plan to rebrand the city. Duval says the signs fit in with the branding initiative.

“They’re pretty large; we’ve got a four foot diameter base at one end,” says Duval. “It’s going to receive not just the sign but also an LED light. So these will be illuminated with a solar approach to them.”

Along with the new signs, 90 street signs are going to be replaced in the downtown core, which Duval says fits with the rebranding process.

“It will be a great demarcation for the downtown. I think it’s going to look great, a great visual. We know we’re going to be doing the LED lights as well, later on this summer,” said Duval to city council. “So we’re talking about how a city looks, I think we’re making some great progress.”

Mayor Steve Black says they have been talking a lot about strategic planning and beautification for Timmins, and is on board with the plan.

“I think this is one of those important steps,” explains Black. “When you drive in any community, the welcome sign is the first real feel for the community. I know driving the highway, I’ve seen a lot of communities that have replaced theirs in the last couple years.”

Duval says the two gateway signs should be installed by July.