South Porcupine to Foleyet: Next stop for a church bell first dedicated in 1916 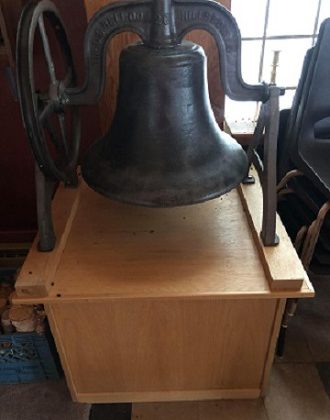 When South Porcupine’s Anglican church closes in January, the congregation will bring several items over to St. Matthew’s Cathedral in Timmins.

But rector, the Very Rev. Valerie Isaac says not everything.

“The church bell, which hasn’t been in the steeple for a long time, will now be going to Foleyet, who lost their church bell a few years ago,” she says.

The bell at St. Paul’s was dedicated by a Mr. Englehart in 1916.  Isaac says she’s glad it’s going to a different parish, while staying in the same diocese.

St. Paul’s building will be de-consecrated on January 25. Between now and then, the congregation is selling off whatever assets it can.  And Isaac says some assets will move to the congregation’s new place of worship in Timmins.

“A lot of the items from St. Paul’s will be going with us to St. Matthew’s, but as you can imagine, there’s still a lot that won’t be able to come.”