Dwight comes home to the North

A file photo of Dwight when he was found abandoned in Schumacher. (Timmins Police Service)

We have a happy ending to a story we first reported almost a year and a half ago.

Dwight the orphaned bear cub has been released into the wilds near Matachewan by the natural resources ministry.

He was named Dwight because on May 1st, 2019, he was found crying in a carport on Dwyer Avenue in Schumacher.

Timmins Police communications coordinator Marc Depatie recounts how the search for Mama Bear was fruitless, so Dwight was taken into protective custody.

“Constable Tony Chilton cared for the bear for a brief period of time, turning the bear over eventually to the Ministry of Natural Resources and Forestry,” says Depatie.

Dwight spent the interim at a bear sanctuary near Huntsville.

Depatie says there was a bit of a tug-of-war with the ministry, over the bear’s name.

“We were hopeful to change his name to Cruiser or Serpico or something akin to the policing environment, but we were told that they had dug in their heels and Dwight was going to be the bear’s name.” 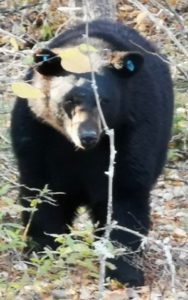 Dwight the Bear in the bush near Matachewan.
(MNRF/TPS)