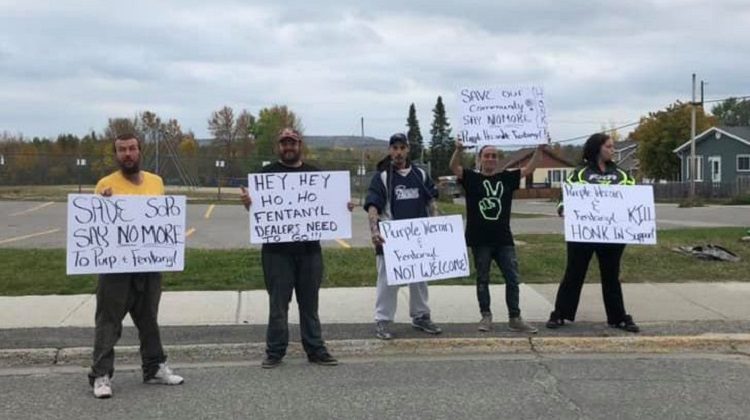 Members of "No More" demonstrate in South Porcupine, to get purple fentanyl out of that community. An off-shoot of the group called "Hard Core Changes" has broadened that cause. (Photo submitted by Lynn Festarini-Jones)

You’ve seen or heard of the picketers in South Porcupine, demanding an end to purple fentanyl circulating in that community.  Now an off-shoot group is taking it further, aiming at opioids and other deadly drugs.

Melissa Harju Michaud is the founder of “Hard Core Changes”.  Her group’s first activity is Saturday between 2:00pm and 4:00pm, picketing on both sides of Algonquin Boulevard, outside city hall.

“We’re trying to get our community behind us to rally and hold our signs and hopefully push some of the dealers to stop selling,” says Harju Michaud. “Ultimately, that’s our goal.”

Then Monday at 7:00pm at Gillies Lake, a candlelight and flashlight vigil is planned for addicts who have died.

Harju Michaud has a quick answer to why she’s doing this.

“June 28th, my cousin overdosed from fentanyl and we lost him and it’s just been my motivation since.”

Another family member died in similar circumstances this past weekend.