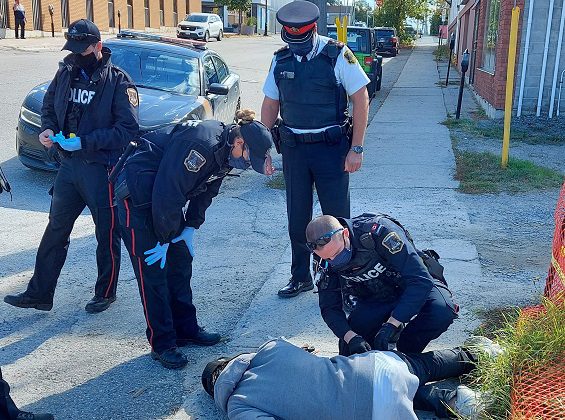 In the first ten minutes of their first foot patrol, Timmins Police Insp. Rick Blanchette and Staff Sgt. Guy Bouffard encountered someone in the throes of a drug overdose. (Timmins Police Service photo)

As communications coordinator Marc Depatie remarks, it’s getting them back to tried and true crime reduction.

“This allows for officers of a senior rank to participate in basic policing in terms of foot patrol,” Depatie adds, “so that they see firsthand the struggles, the rigours that the front line officers are dealing with.”

It didn’t take long to show its worth.  Within ten minutes Inspector Rick Blanchette and Staff Sergeant Guy Bouffard starting their first foot patrol, they came across a person in the throes of a drug overdose.

“First aid was rendered by those officers as well as platoon officers who attended the scene as well,” Depatie says, “until such time as EMS was able to bring the person to Timmins and District Hospital for more intensive treatment.”

Depatie says the increased foot patrols makes it easier for anyone to approach a senior officer with their concerns about where they think more attention should be focussed.  Those officers have direct input into where resources are deployed.