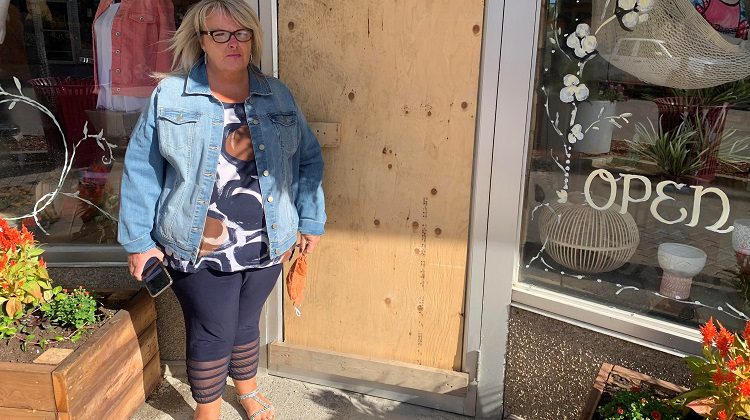 Lem Grass owner Sonya Biemann stands beside the door that was smashed on Saturday afternoon -- the latest in a list of incidents involving her and her store the last three weeks. She says it's time for the city to find a solution to vagrancy and drug abuse downtown. (Bob McIntyre, MyTimminsNow.com staff)

Sonya Biemann is fed up.

In a matter of three weeks, the owner of Lemon Grass gift store on Third Avenue has suffered a concussion in a random attack, and had the front door of her store smashed.

She says her attacker came by on Saturday and threatened her life.  That same afternoon, the door was smashed by a known shoplifter when he was asked to leave.

Biemann says people and businesses are being failed by police and city council, who aren’t solving vagrancy and drug problems downtown.

“For three years, they’ve focused all of their energy on a certain establishment,” she remarks.  “Now it’s time,  they need to focus their energy on the rest of the city that needs help.”

Biemann says it’s not up to business owners or taxpayers to find a solution.

“We voted the mayor in. We voted the council in. We have the BIA who’s supposed to stand by their members,” she points out. “Now it’s up to them to come up with a solution, not me. And I don’t like being asked ‘what do you think the solution is.’ It’s not my problem to find out what a solution is.”

Biemann says she doesn’t blame police.  They’re only dealing with the same problems.